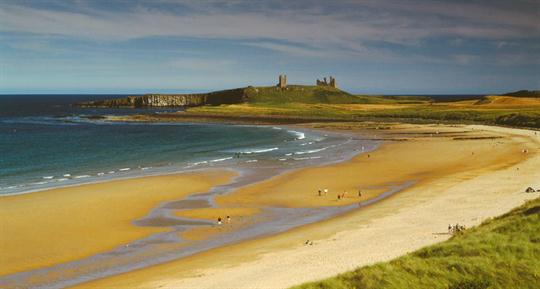 That bastion of all things geographical, Ordnance Survey, estimates that the UK’s coastline stretches for an astonishing 11,073 miles (17,820 km). If you add in the larger islands (such as the Isle of Wight and the Isle of Man), that number goes up to nearly 19,500 miles.  Not only is it a long coastline, but according to the Hausdorff dimension (that measures the ‘wiggliness’ of a coastline – no, really), it scores an impressive 1.25, which is, apparently, pretty wiggly.

From the dramatic, rocky cliffs of North Cornwall to the wide-open beaches of Norfolk, the UK coastline is a stunning combination of incredible views, family-friendly seaside towns, exhilarating walks and historic sites. Travel down to the south west of England and you’ll find the Jurassic Coast, an UNESCO heritage site and one of the most ancient landscapes in Europe. Head up to Sussex and you’ll come across vibrant seaside towns developed by the Victorians like Brighton and Hove, that still draw the crowds in today.

So if you’re planning to head out to the coast for a luxury cottage holiday, where are the top five destinations? Here is our selection of some of the best coastal locations:

Dramatic, wild and truly spectacular, England’s most northerly county is home to a very special coastline that has seen everything from Viking raiders to Second World War enemy fleets in its time. Today, things are a little quieter, but the unspoilt beauty of this coastline is a gem waiting to be discovered.

On a clear day you can see the magnificent Lake District to the north and the tip of Wales to the south. Morecambe Bay is a huge, sandy expanse that covers over 120 square miles. Around the Bay is the rolling Lancashire countryside, and for a family day out Blackpool is just up the coast.

Travel as the crow flies from Morecambe Bay to the opposite side of the country and you’ll come to the beautiful North Yorkshire Coast. With historic towns such as Whitby to explore and miles of superb hiking and walking paths, this is the perfect destination if you want to get out and about.

Just an hour from London by train brings you to the Hampshire Coast, including the great naval bases of Southampton and Portsmouth. Travel just a few miles inland and you come to the south’s great open expanse, the New Forest. With great attractions such as Beaulieu Motor Museum and Chessington World of Adventures close by in Surrey, the Hampshire Coast has lots to see and do.

You cannot talk about coastal cottages without mentioning the glorious West Country. This incredible part of the world is intrinsically linked to the sea, and its entire history and culture has a maritime feel. All around the Devon and Cornwall coast, from Woolacombe on the north Devon coast to the balmy climate of Torbay and Dartmouth, and down to the rugged beauty of Bude’s north Cornish shore or the broad, sandy and family-friendly beaches of Newquay and Carbis Bay, Cornwall and Devon represent the ultimate choice for great coastal cottage holidays.