Dark Skies Festival in the North York Moors: Whitby and the Cosmos

To coincide the National Parks Dark Skies Festival, a major new exhibition opens this month, which examines the role of one of North Yorkshire’s coastal towns in the understanding of our universe.

Whitby and the Cosmos: the Search for Dark Matter at Whitby Museum features exhibits ranging from 18th century scientific instruments used by Captain Cook’s research team during their exploration of the South Seas, to cutting-edge equipment from Boulby Underground Laboratory, just north of Whitby, where 21st century scientists are leading the search for dark matter (hypothetical form of matter that is thought to account for approximately 85% of the matter in the universe). 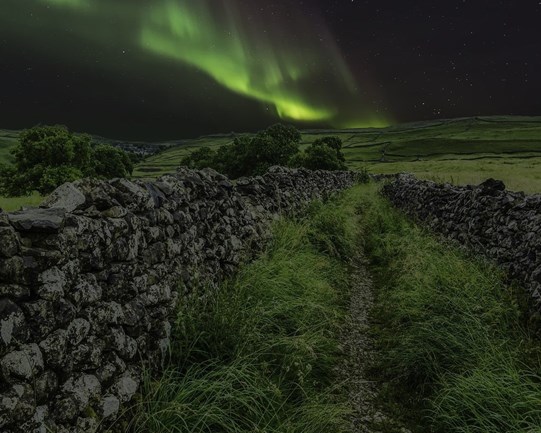 The North York Moors are one of the best places in the north of England to watch the Northern Lights.

The exhibition also explores the work with the ZEPLIN-III, until recently employed at Boulby and now installed as the museum’s newest acquisition. ZEPLIN III contains a xenon chamber to detect WIMPS (Weakly Interactive Massive Particles), which are thought to constitute dark matter.

Curator Roger Osborne says: ‘We are thrilled to have ZEPLIN III as part of our museum. We aim to use it and the exhibition to tell visitors about the remarkable and internationally important work taking place at Boulby Underground Laboratory.

‘The exhibition is also a great opportunity to highlight Captain Cook’s role as an innovator in scientific exploration whose work contributed to our current understanding of the universe.’

Visitors to the exhibition have the chance too, to learn how to get involved in astronomy through the annual Dark Skies Festival organised by the North York Moors National Park, and through local organisations like the Whitby & District Astronomical Society.

There will be a talk on The Search for Dark Matter by Professor Henrique Araujo of Imperial College at the museum on February 15th. The talk starts at 7pm (doors open 6.30pm) and will include a sneak preview of the exhibition. The professor is one of the world’s leading experts on dark matter. He leads the UK team developing the next generation of LUX-Zeplin experiments in the search for dark matter, as well as developing radiation detection instruments for spacecraft. Professor Araujo arranged for the donation of the ZEPLIN III to Whitby Museum by Imperial College.

Entry to the talk is free, but booking is essential through Whitbymuseum.org.uk! The exhibition runs from February 16th-July 20th, and the museum is open from 9.30am to 4.30pm every day except Monday. The opening weeks of Whitby and the Cosmos: the Search for Dark Matter are part of the North York Moors National Park’s Dark Skies Festival, and the exhibition is part of the Royal Society’s Places of Science scheme.

All words by Joe and Geoff Ellis of Unique Retreats, Yorkshire. You can view over 60 of our gorgeous cottages in Yorkshire by clicking here.